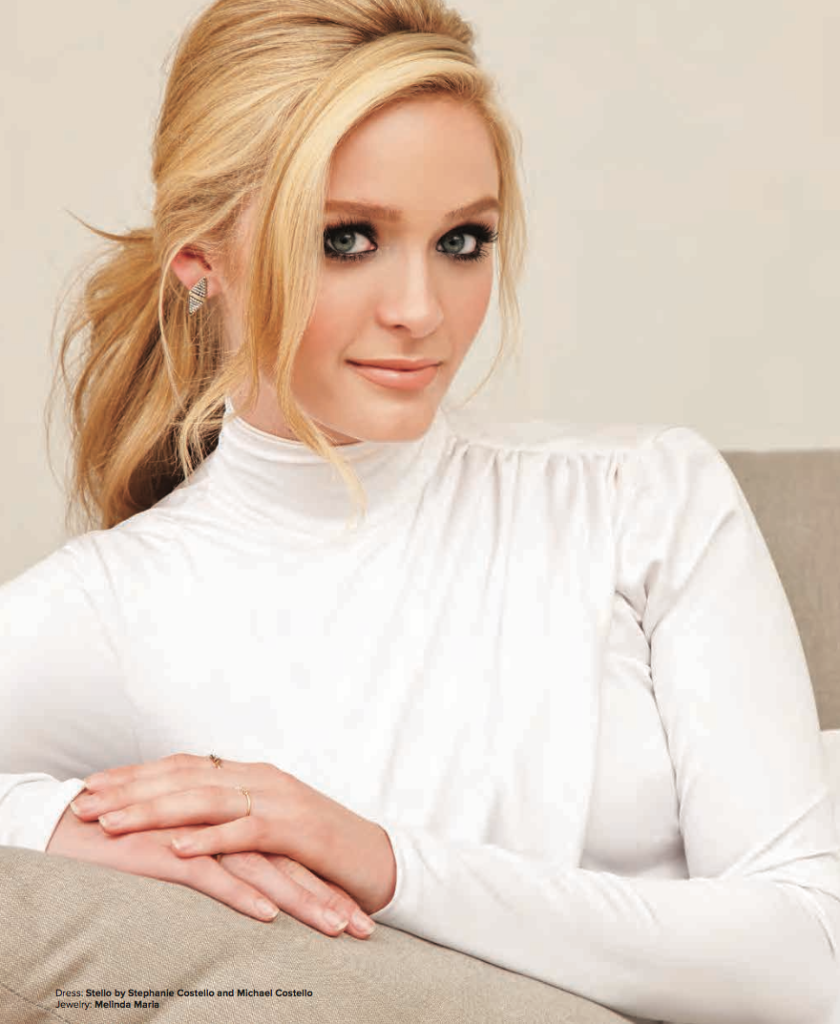 and full of energy best describe actress Greer Grammer. Her excitement for life is contagious, so it’s no wonder the young actress with a burgeoning career has been carving a name for herself in a town that already “knows her name.”

A California native (she grew up in Malibu), Grammer can’t recall a time in her life where acting wasn’t part of the plan. With the acting gene in her blood (Kelsey Grammer is her father), she describes the desire as almost a “subconscious thing.”

“I was a different Disney princess every day, I’d play dress-up and watch old movies as a 3 year old,” she recalls. “An actress is what I always wanted to be.”

Enrolled in acting, singing, and dancing classes as a child, Grammer attended a boarding arts high school and studied musical theatre for two years before transitioning to home-school while she looked for an agent. The actress was encouraged by her parents, but admits she had to prove to them she was serious and loved acting for the craft, not to become famous or have photographers follow her around. “They were very careful of making sure I was doing this for the right reasons,” she says.

By the time she was 16 years old, Grammer had secured an agent and began pursuing her dream. It was around this time she became involved in beauty pageants. “They looked like fun and were a good way to get some life experience.” In 2008 she entered and won her first pageant, Miss Teen Malibu, and for the next few years competed and placed in various pageants throughout California.

“It really helped me with my stage presence, my interviews, and my confidence. I’m competitive by nature so it was an opportunity to channel that competitiveness into a different outlet.”

With a few roles under her belt, Grammer’s breakout role came in 2011 when she joined the cast of MTV’s teen comedy series, “Awkward.” Now in its fifth (and possibly final) season, Grammer portrays Lissa Miller, who she describes as a fun-loving, naïve, Christian cheerleader. “Lissa and I are very similar,” says Grammer. “She’s extremely peppy, upbeat, and happy, and while I’m not as energetic as she is at times, I am pretty much the same way. I always say first season Lissa is like freshman year Greer. We’re a nice mix of each other.”

She refers to her “Awkward” cast and crew as “family” and says she genuinely loves going to work each day. “I’ve had the most amazing time on the show, getting to grow with people and have this other family that’s so constant in my life,” says Grammer.

When talking about growing up, Grammer in fact has done just that while working on “Awkward.” The show was picked up her freshman year of college . While most young actors would focus solely on their careers, Grammer says it was only natural to go to college; it was the next step in the progression of her education. Working all four years on the show and at college was “tough,” she admits, but her academics wasn’t something from which she wanted to take a break. “I didn’t have a normal high school life and I wanted the whole college experience – that was important to me,” she says. Being able to graduate with her friends was another huge influencer that drove her forward.

Since graduating from the University of Southern California with a degree in Theatre, Grammer has been extremely busy moving forward in her career. She’s set to star in two films due out early next year, Lifetime’s “Manson’s Lost Girls,” where she portrays Leslie Van Houten, one of the girls who fell under Charles Manson’s spell and helped him commit murder, as well as the lead in the Indie film, “Emma’s Chance,” a story based on California’s real-life Red Bucket Equine Rescue Ranch founded by Susan Pierce. They are two completely different, yet powerful roles.

In preparing for the role of Van Houten, Grammer watched a lot of movies, read tons of stories that people had written about the woman she was portraying, and listened to many tapes from the actual Manson hearings, she says. It was important to her that she gain a sense of who this woman was, especially before the killings happened – it’s what sets this movie apart from the many others that have been made. The film takes place a month or so before the murders and continues up to the night of the crimes. “It was very fascinating, and I wanted to play her correctly.”

Grammer was attracted to the role for many reasons but especially for her fascination with the story and the opportunity to portray a character that was completely opposite from what she’s done so far. “It was a challenge … a completely different role for me than people were used to seeing and I was excited to do it,” she says.

In “Emma’s Chance,” Grammer takes on the lead of Emma, a young woman who saves  an abused horse from the ill-fated destiny of a slaughter house. Filmed at Red Bucket Ranch, the story centers around the impressionable young girl who finds herself in trouble when she hangs around the wrong crowd. Committed to completing community service at the ranch, Emma falls in love with the place, the horses, and the work that they do.

Grammer describes the film as a love story between a girl and her horse. “The project was something I wanted to do because I love animals, and horses are smart, amazing creatures.” All of the proceeds from the film are being donated to the ranch to continue its efforts.

This past January, Grammer served as Miss Golden Globe, an honor bestowed upon the children of established celebrities. Grammer says the experience was “surreal.”

“The events leading up to the awards ceremony were amazing and the night was spectacular,” she recounts. “To meet so many people whom I admire, like Kerry Washington, Oprah Winfrey, and Meryl Streep, felt like a dream.”

Looking ahead, Grammer knows she is on the right path. While she loves both film and TV, her long-term goals include producing, development, writing, and directing. The problem Greer says is, “I want to do everything!” She looks up to actors like Reese Witherspoon, whose career she’d like to emulate. “She’s such a talented actress and I love everything she does – she can do both comedy and drama extremely well and I want to have that kind of career.”.

And though some may think the best advice she’s gotten must have come from her father, Grammer says that’s not the case. “I love that my dad is in the entertainment industry because we can talk about the things we like and dislike, and that’s nice to share with him.” When it comes to mentoring, however, she turns to her acting coach Leigh Kilton-Smith to keep her grounded.

“In this business it’s important to stay level-headed and open-minded,” says Grammer. “She reminds me to wish the best for everybody, and don’t let the competitiveness get the best of you. Walk into a room, show who you are, then leave and be happy and wish that whomever gets [the role,] it is the right person.”

With that mantra in mind, Grammer is all about looking beyond the negative and being happy in the now. To her, beauty is in a smile, and says that she is happiest when she is laughing.

“If you can make me laugh, you’re my favorite person.”

Learn more about her role of Emma by visiting RedBucketRescue.org or Emma’s Chance on Facebook.