It was history in the making this past weekend at the Tony Awards with Tyler Mount.

Mount, Broadway’s biggest influencer and co-producer of the Broadway smash Once On This Island, became one of the youngest Tony Award winning producers in history at the 72nd annual ceremony with the show’s win for “Best Musical Revival.” As the co-producer of the eight-time nominated Broadway smash, Mount’s involvement in the inaugural trial of the “Underrepresented Producer Initiative,” gives a carefully selected group of individuals the opportunity to learn to produce on Broadway in the hopes of turning commercialism upside down.

The original Broadway production opened on Oct. 18, 1990, at the Booth Theatre and closed on December 1st,1991, after 469 performances and 19 previews. During its initial run, it was nominated for a total of eight Tonys, but took home none. 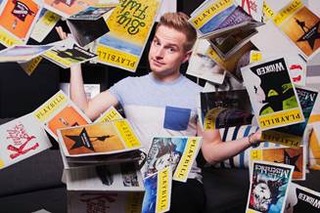 For as long as I can remember I’ve wanted to pursue a career in the theatre, but above all else, I’ve longed to be a part of the Broadway community,” says Mount “Last night’s outcome is a testament to pursuing your dreams relentlessly, no matter how out of reach they may seem. I am truly humbled to have been honored with theatre’s most prestigious honor. Tyler Mount

Once On This Island follows Ti Moune (Hailey Kilgore), a peasant girl in the Antilles who falls in love with Daniel (Isaac Powell), a young man she saves from a car crash. When he returns to his wealthy family on the other side of the island, four gods: Mother of the Earth Asaka (Alex Newell), God of Water Agwé (Quentin Earl Darrington), Goddess of Love Erzulie (Lea Salonga) and Demon of Death Papa Ge (Tamyra Gray), guide Ti Mourne through a test of her love against prejudice and hate.

Recently profiled by Forbes, Out Magazine  and The New York Times, Mount is also the creator of the wildly popular web series “The Tyler Mount Vlog,” which has not only amassed millions of dedicated viewers in over 168 countries, but has also featured star-studded guests including Gloria Estefan, Lin-Manuel Miranda, Todrick Hall, Perez Hilton, Anthony Rapp and more. The Tyler Mount Vlog has quickly become a platform for stage stars to not only reach their core audience of the Broadway super fan, but also the opportunity to be discovered by a whole new legion of viewers who are tuning in from around the world.

The Restoration of the Marriott Syracuse Downtown