Long before he had his own fashion label, Michael Kors studied at FIT. Before Audra McDonald’s name blazed across a Broadway marquee, she trained at Juilliard. And years before she would be known as Lady Gaga, Stefani Germanotta majored in theatre at NYU.

New York City is home to countless talented individuals—although many of them are still in school learning their craft. Want to see these rising stars before they make it big? Then it’s time to head back to school—to see student shows and exhibits, that is.

We picked five NYC schools that are clearly doing right by their educational programs, as shown by their growing lists of notable alumni. Here’s how you can scope out the next generation of artistic talent.

Fashion trends are always changing, but they all start with a strong grounding in design and aesthetic. Students at FIT immerse themselves in all phases of the fashion business, from concept and design to marketing and business development.

You don’t have to be on the Fashion Week invite list to be in the know about this newest crop of fashionistas. Each spring, FIT hosts an exhibition featuring the work of more than 800 soon-to-be graduates of the School of Art and Design. This year’s event, which is free and open to all, will take place May 13-25. See school’s website for additional details.

Tisch School of the Arts at New York University

For over half a century, NYU’s Tisch School of the Arts has been one of the nation’s top academic centers for the study of emerging media, cinema, and the performing arts. There is a seemingly endless list of famous alumni across all phases of the arts. Only time will tell who among the current classes of students are destined for stardom.

Want to catch a glimpse of a future Hollywood or Broadway star? The Graduate Acting program at Tisch will be presenting Anton Chekhov’s “The Cherry Orchard” at the Atlas Theatre March 23-28. Visit the box office online for tickets. 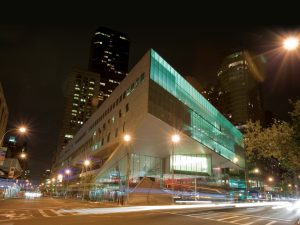 The Juilliard School is one of the nation’s premier conservatories for the study of music, drama, and dance. Music lovers especially will revel in the performance calendar at Juilliard, which offers near-daily recitals and concerts to keep your nights filled with sweet symphonic sounds.

You don’t have to wait for Juilliard’s highly accomplished students to graduate in order to see them in action. On March 21, the Jazz Ensemble at Juilliard will present “What We Hear: Student Works,” a showcase of student composers who will appear as featured performers of their own works.

Parsons The New School for Design

“Project Runway” might have made Parsons a household name, but the school has been a beacon of innovation for the art and design world since 1896. Besides its School of Fashion, Parsons comprises four other schools: School of Art and Design History and Theory; School of Art, Media, and Technology; School of Constructed Environments; and School of Design Strategies.

Parsons has transformed downtown New York into a top destination for art and design exhibitions. In addition to exhibitions at the Sheila C. Johnson Design Center, which features two galleries, other Parsons show venues have included The Kitchen, PULSE Contemporary Art Fair, and Design Within Reach. Shows are held continuously throughout the year, featuring work by faculty and students, as well as outside designers and artists. Call 212-229-8919 to learn about the current exhibits open to the public.

Pratt Institute is known as a “living lab of craft and culture” in the midst of our city. The school brims with such artistic talent that it has two campuses: the main location in Brooklyn’s Clinton Hill neighborhood and the Manhattan Center, which sits at the corner of Chelsea and Greenwich Village. Students at Pratt study everything from studio art to filmmaking.

Pratt also hosts numerous exhibitions year round, including the showcases of student work at the end of each academic year. But if you’d like a dose of creativity to your daily life now, why not browse the Pratt Portfolios on the school’s website? There, you’ll be greeted by dozens of online collections of student work, everything from animation and digital art to fashion and film.

While some of these famous figures left school without graduating to pursue fame and fortune, it’s clear they were given the artistic framework and cultural foundation they needed for successful careers. Here’s a sampling of the talent that has come out of these fine schools:

Tisch School of the Arts