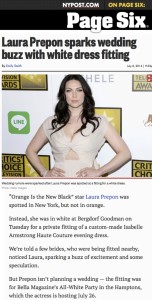 “Orange Is the New Black” star Laura Prepon was spotted in New York, but not in orange.

Instead, she was in white at Bergdorf Goodman on Tuesday for a private fitting of a custom-made Isabelle Armstrong Haute Couture evening dress.

We’re told a few brides, who were being fitted nearby, noticed Laura, sparking a buzz of excitement and some speculation.

But Prepon isn’t planning a wedding — the fitting was for Bella Magazine’s All-White Party in the Hamptons, which the actress is hosting July 26.