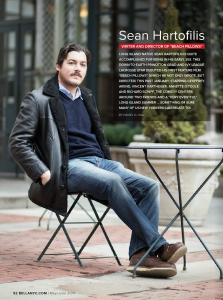 Long Island native Sean Hartolfilisis quite accomplished for being in his early 30s. This down-to-earth Princeton grad and Ivy League lacrosse star debuted his first feature film “Beach Pillows”(which he not only wrote, but directed) this past January. Starring Geoffrey Arend, Vincent Kartheiser, Annette O’Toole and Richard Schiff, thecomedy centers around two friends and a “very eventful” Long Island summer … something I’m sure many of us New Yorkers can relate to!

With summer almost upon us, I really enjoyed sitting down with Sean to talk about his inaugural film, his favorite directors and how he continues to make his dreams a reality.

Can you tell us a little about your film?
“Beach Pillows”is a brother’s keeper comedy about two friends in their late twentiesgrowing up over the course of a very eventful Long Island summer.  The film stars Geoffrey Arend, Vincent Kartheiser, Annette O’Toole, and Richard Schiff.

What inspired you to write Beach Pillows?
I was inspired by a few things. Great films – “This Side of Paradise,”“The Sun Also Rises,”“On the Road,” “A Fan’s Notes,”“A Portrait of the Artist as a Young Man,” “I Vitelloni,” “Saturday Night and Sunday Morning,” “Mean Streets,” “The Graduate,”“Withnail & I,” “Bottle Rocket,” and “Somers Town,” among others. Also, my friends and family inspire me.

How did you come up with the characters for this film?
The two main characters, Morgan and Nick, represent two sides of my personality, or any personality, the ego and id. The quest is for them to learn from each other and become wholepeople and hopefully happy people. I’m sure they’re also inspired by my brothers, friends and all the great characters of cinema and literature that I love.

How did you develop the storyline?
In brief, I tried to tell an epic story of real human emotions. Every trial or moment of joy that these characters experienced, I attempted to produce the corresponding emotions of those moments in myself with the story I was writing.

Who has influenced you to become a writer/director?
I grew up watching old movies with my father. I’ve always loved reading and writing and watching movies. The more I learned about it all, the more I loved it and wanted to make it my life’s work.

How do you motivate yourself to write and direct?
I’d say I live and think and try to process these thoughts and feelings on paper, perhaps through a discussion between a few characters that might represent different parts of my brain. And, of course, by consuming great art. But, frankly, I don’t need to motivate myself too much. I really love doing this and feel blessed to have the opportunity. As far as the transition from writing a project to directing it, motivation is in high supply; the issue is money.

What is your favorite movie?
That’s very hard. Can I maybe tellfive? “Taxi Driver,”“The Last Detail,” “Withnail & I,”“Scarecrow” and “Rio Bravo.”I’m sure I’m missing 30 morethat I love thatcould be my favorite on any given day.

Who is your favorite director?
I’d love to answer like this: John Cassavetes, F. Scott Fitzgeraldand Jesus Christ.

Did you find any parts of the film challenging to write?
It’s all very emotional, but I didn’t feel particularly challenged writing it. So many people work so hard at jobs I would consider challenging. But I loved this.I felt, as you said, inspired. I work on these things so much in my head, that when I sit down I’m ready to go. It’s exciting.

What is the most difficult part about writing?
Just sitting down.

Looking back after completing the film, what are you most proud of?
I’m proud that I told the story I was trying to tell without compromise, and that I treated people the way I’ve been raised to treat people throughout – with love, kindness and respect.

What did you enjoy the most when you were creating “Beach Pillows?”
I enjoyed shooting it. It was my first feature as director, and it was a really fun, rewarding, beautiful and memorable experience. So I guess I’d say I enjoyed my cast and crew most of all. I appreciate them more than I can say.

What is the most fulfilling feeling for you as you watch the film?
I’m fulfilled now when people tell me how it has affected them, and if I watch it with them (which can be difficult), when I know all these big moments are landing properly and moving them. The creation is a very personal and fulfilling process, but now I want people to connect to it and love it as much as I do.

What is the greatest thing you learned from creating this film?
That I have no doubt I’d like to tell these stories for the rest of my life, and I feel that I have the will and ability to do it. I just feel lucky to have had this opportunity. It was a very long road, but it was very much worth it.

Do you have any upcoming films in the works?
I know probably the next five films and a rough order in which I’d like to make them, based on my anticipated emotional space and the desire to bring everything I can to them. I can say the next one is set in Upstate New York, and if “Beach Pillows” was my “Mean Streets,” that one’s my “Taxi Driver.”