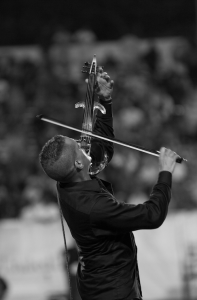 Lorenzo Laroc is a native New York electric violinist, composer and arranger. He began playing the violin at the age of 8, and though he was classically trained, he now plays a diverse gamut of styles, including jazz, rock and Latin music. After several years of working in California with Sheila E., Laroc formed his own group of New York City musicians called Masterpiece. He uses his signature trademark, a custom-made, five-string, plexi-glass, electric violin/viola. The intensity and passion with which Laroc plays expresses not only his musical versatility, but also his deep love and commitment for what he does.

1. When did you first realize you wanted to be a musician? Even more, an electric violinist?

Singing since the age of 8 never prepared me for what I was about to experience when I walked into my 6th grade music class and saw an acoustic violin for the first time. I picked up the instrument, bow in hand, and it felt so good, as if it instantly became an extension of my body. I played with it for a while, and the sound that came out of it was so calming and smooth.

One day, in the lunchroom of the High School of Performing Arts, a classmate handed me a Walkman cassette player with earphones and asked if I would like to listen to this cat by the name of Jean-Luc Ponty, a French virtuoso violinist and jazz composer.  It was the sweetest sound my ears had ever heard – an electric violin! He was amazing and the sound of that violin captivated me. After borrowing the cassette tape and listening to it repeatedly for 10 days straight, I realize then that this was my calling. I was going to be an electric violinist!

2.  How would you describe your style?

My style is a true mixture of many styles. Being born and raised in NYC, the most diverse city in the world, I developed an appreciation for the many different genres that surrounded me. I played with a rock band and a Latin band in college. I’ve performed with groups from Africa, blues bands, and alternative music [groups], so my compositions vary greatly. Some say I am a world artist, others call me a fusion artist or a jazz artist, but I call myself an all-styles artist.

3.  When would you say you received your first big break?

I performed at Carnegie Hall at the age of 15 – to me, that was my first big break. It was such an overwhelming experience knowing the great potential I had that solidified my life as a concert violinist and the great opportunities my art and talent could bring into my life.

4.  If you had to do it all over again, would you do anything differently?

Reflecting back on my career and where I have been, I truly would not change a thing. Looking at the present and where I am headed, I would like to find more time to absorb all of my life’s experiences as an artist … perhaps find the time to document them better –create a digital library that includes photos of my tours and live concerts, recordings and footages of live shows and interviews I’ve appeared in.

5. What was the best advice you ever received?

During a rehearsal break, when I was touring with Grammy-nominated American singer-drummer-percussionist Sheila E., her dad, Pete Escovedo, said to me, “Lorenzo, there is not just one great artist for any given instrument or field. There is always room at the top for great artists; it’s not for just for one cat.” That statement gave me the confidence and courage to stand in front of thousands of people in stadiums, such as Madison Square Garden, Barclay’s Center, Arthur Ash Stadium and Oakland Coliseum. I knew then, I was working with the best artists in the business, and I was one of the top electric violin players in my field.

My hero list is quite diverse. Composer violinist Jean-Luc Ponty was the number one reason I decided to stop pursuing classical music and made the change to modern music such as fusion, rock, etc., and that the electric violin would be my instrument of choice. Second is John Coltrane – his soprano sax work on the 1960 release of his album “My Favorite Things” would influence the way I hear music in general.

Third is John Fitzgerald Kennedy. I believe he was one of the country’s greatest presidents, and I loved everything he stood for.

7. If you hadn’t been born in this century, when and where would you liked to have lived?

I would have loved to live in the mid-16th through early 17th century in Cremona, Italy, during the time of Antonio Stradivari because he created the greatest violins known to man. I would love to have walked into his shop and bought seven of his finest violins – one violin for each day of the week.  I loved the music of that era and played it extensively in college.

8.  What’s the one thing you want BELLA readers to know about Lorenzo Laroc?

No matter how many A-listers, secretaries of state, millionaires and billionaires, I perform in front of, I truly am the “People’s Electric Violinist.” I perform just as passionately for free public performances, free school concerts and community events as I do for any of my high-end clients. It is my way of giving back to society and especially to those individuals who are unable to see a live concert because of financial or age constraints.

Nothing Says Summer Like A Campfire Treat: Celebrate National S’mores Day With These Goodies

Beyond the Blow Out: Your Favorite Hair Services Now Come To You