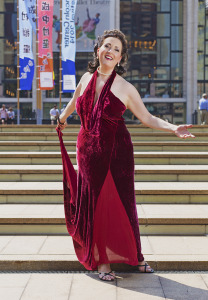 Cristina Fontanelli, a world-renowned opera singer, grew up in Brooklyn with her Italian family. She graduated from the American Academy of Dramatic Arts and also attended the Juilliard School in Manhattan. Her stunningly beautiful soprano voice has taken her to the White House as part of President Clinton’s holiday celebration, and was even was invited to open the ceremonies at the Stars and Stripes Inaugural Ballfor President George W. Bush in 2005.

Fontanelli has appeared with opera companies throughout the United States and abroad, including the Palm Beach Opera, the New York Grand Opera, the Opera of Hong Kong and the Cairo Opera. Many major publications, including The New York Times, have praised her singing as having “technical ease” and “flaunting bravura.”

BELLA had the good fortune to not only sit with Fontanelli for this interview, but to also hear her beautiful voice at a recent event at the St. Regis in Manhattan.

What inspired your career to become an opera singer?

I originally wanted to be an actress and graduated from the American Academy of Dramatic Arts. While I was studying there, I was performing at the Light Opera of Manhattan and then one day backstage, I heard the voice of Maria Callas coming over the radio airwaves. She had just passed away and there were many fans of hers in the cast. I was mesmerized by the sound of her voice. She was known as a great singing actress and this is what opened my mind to the possibility of using my acting and singing talents in the drama of the opera stage.

What is the best advice you ever received?
To be myself. I think that is one of the hardest things all human beings face – trusting one’s own personality and abilities. I have grown more comfortable in my “own skin” over the years. It was very challenging for me as I was extremely shy, like so many actors and artists are.  I only blossomed on the stage. Now I am much more used to being in the “limelight.” It is gratifying to have found a certain level of success while still being able to stay true to myself.

You mention wanting to be an actress early on in your career; how do you feel about acting now that your singing career has taken you all over the world?

I still love it! I have always gravitated toward the spoken word. Even the songs I choose to perform have to have deep meaning for me. It was only when I realized I could act in the opera that I chose to pursue that career path. One of the highlights of my career has been that I have been cited as one of the American Academy of Dramatic Arts’ top alumni on a fairly short list that includes Cecil B. DeMille, Edward G. Robinson, Robert Redford, Anne Bancroft, Anne Hathaway, etc. Wow!

How do you balance your personal life and career?
I don’t (laughs)! Someone I admire is the great businesswoman Mary Kay. I remember reading a book about her – her priorities were faith, family and then business. That ideally is the order – God is at the center of my life. I don’t have children as my life was mostly living out of suitcases and I feel strongly that children should have a stable life. Thank goodness I love meeting new people. My fans have become my friends. Anyone who is close to me understands that my career and its demands are extremely important. I feel that the gift of having a voice is a calling and I honor that.

If someone didn’t know you, how would you describe yourself?

Caring, kind, fun (I hope that’s what people would say), [with an] Italian temperament – passionate! I’ve worked hard to have mostly positive energy running my life.

Who has been the biggest inspiration in your career?

My mother –to this day, she has one of the most beautiful voices (untrained, by the way!) I have ever heard. The song that is most requested I sing is “Mamma” – it kind of speaks for itself.

Out of all the celebrities you have gotten a chance to join the stage with you, which one of them were you most excited for?

Tony Bennett – he is the consummate musician – he becomes the music. I will never forget sharing the bill for the first time with him in Boston. I was just overwhelmed to hear the timbre of his voice live.

What is something you want to be remembered by?

That my voice and persona helped to make this world a bit more beautiful by lifting people up and helping them get back in touch with the full range of human emotion – inspiring them and giving them hope.

What is your greatest accomplishment in life?
To have had the courage to use the gifts God has given me through a challenging life and career

journey. People have been suggesting I write a book – maybe that is coming soon.

What’s your definition of beauty?

Anything that lifts up the human spirit and brings it toward the “Light” – an act of courage; an act of kindness; children playing; a beautiful symphony or poetry. It is not surprising that people respond to human beings that meet our modern definition of physical beauty, just as we respond to a beautiful flower or scene in nature. Of course, beauty with substance and character is the real ideal. I admire Angelina Jolie, for example, not only for her movie star beauty, but also for the great humanitarian work she does.