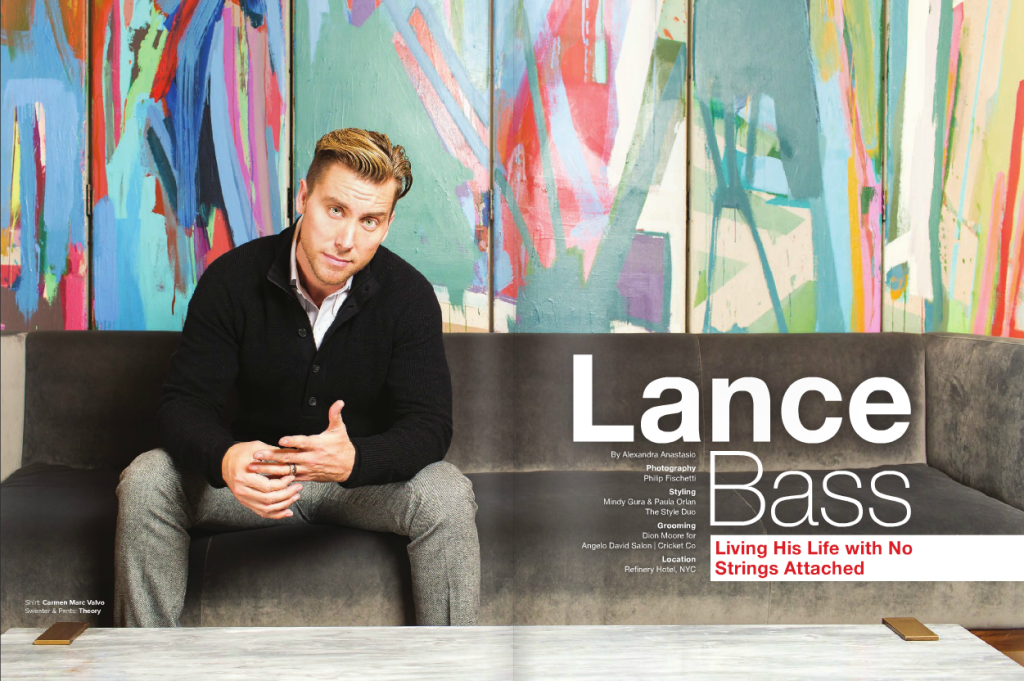 Lance Bass is an entertainer who needs no introduction; he’s one of those performers who will go down in musical history as being part of one of the most popular boy bands of all time. Boy bands might seem all the rage these days, but Bass and his musical partners of *NSYNC paved the way for a new generation of talent.

If someone had asked a young Bass about his dreams for the future, however, they would have sounded a lot different than where he ended up. As a young boy growing up in Mississippi, Bass was fascinated with space and had dreams of becoming an astronaut. A summer at space camp solidified that dream, until one day he received a call that would change the course of his life.

“After camp I knew I wanted to follow the path to be a space engineer, but at 16 years old Justin [Timberlake] called me and said, ‘Hey, we’re putting a band together.’ My dreams of going to space detoured after that,” says Bass. (Ironically, in 2002, Bass trained for half a year in Russia and became a certified cosmonaut, coming close to being the first entertainer in space.)

The Beginning of Something Big

On October 1, 1995, *NSYNC had its first performance – singing the national anthem a cappella. Bass recalls getting the chills. “I knew it was something special, and it was going to be big for me. But at that point big for me would have been being hired to be the a cappella group that sang at Disney World.” For Bass, his dream was small compared to what lay ahead.

In the span of seven years the band recorded and toured endlessly, rarely taking time off, something Bass says he wishes had been a bit different. “We worked our butts off. Looking back, I would love to be able to tell my younger self, ‘Relax … don’t kill yourself.”

If turning back time were an option, another life lesson Bass would share is to be yourself and come out of the closet immediately. “If I did, I would have had a different life,” he says.  “I would have enjoyed myself more and I wouldn’t have had to hide something major in my life that separated me from my friends and family. I would love to get those younger years back.” 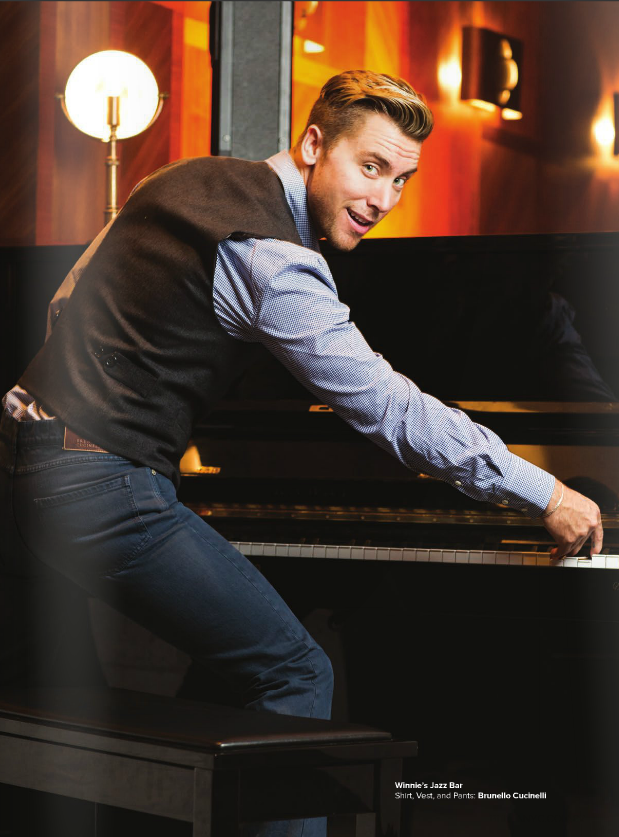 After the group went on hiatus in 2002, Bass began to pursue work as an actor and a producer, appearing in numerous television shows and films, along with a six-month run in the hit Broadway musical “Hairspray.” A man of many talents, Bass has also done a lot of voice-over work, something he says can be surprising to his fans. Having voiced characters in many Disney cartoons, the one project people freak out about is the character of Sephiroth in “Final Fantasy VII,” a fantasy role-playing video game.

“It’s this huge video game and he’s the hardest character to beat,” says Bass. When gamers around the world found out it was Bass’ voice, they flipped. “Most of them were upset their favorite badass character was voiced by an *NSYNC boy band guy!”

Despite the different reactions he might elicit, this multitalented artist loves doing voice-over work. Starting out in a recording studio at a young age, Bass says that since God gave him a “bassy” voice, he’s got to use it.

These days he’s using that voice to host two completely different gigs, one in front of the camera and one behind the microphone. His day jobs consist of working as a daily contributor on “The Meredith Vieira Show,” which he joined in the beginning of season two, and hosting his own radio show that airs daily from 4 to 6 p.m., “Dirty Pop with Lance Bass,” for the past four years on SiriusXM radio.

“I love being a host and getting to talk about my favorite subject, pop culture,” says Bass. “I grew up in entertainment; I love film, television, and music, [so] I eat this up.” Working as a host has been a dream job, especially since he gets to work side by side with a woman he respects and admires. “I love everything Meredith’s done,” he says. “Being able to learn from the best and have an amazing mentor next to me every single day has been a dream come true.”

When it comes to hosting his own radio show, Bass says that has also been a dream come true, albeit one he originally didn’t think he was right for. Scott Greenstein, a close friend and the president and COO of SiriusXM Radio, approached the singer after *NSYNC went on hiatus, but Bass wasn’t ready.

“He was the first to see me as someone who would be great at hosting, but I said no several times,” says the singer. Because he was unsure if it was something he could do and he was involved in other projects, it took a little more nudging on Greenstein’s part before Bass finally agreed to give hosting a try. Starting off small, they put together a weekly show in which Bass went through the top 10 songs, movies, and shows of the week; that’s where he says he “fell in love with live radio.” Wanting to do more, they created a daily show, and “Dirty Pop” – an ode to the *NSYNC song – was born.

“It’s my favorite part of the day,” says Bass. “I can be in the worst mood, and when we go live at 4 p.m. it just makes me happy to hear my callers dialing in and dishing about what’s happening with our favorite entertainers.”

A self-proclaimed lover of the entertainment industry, Bass is drawn to the fact that it’s ever changing; it’s one of the things he loved about being part of *NSYNC.

“You would go into the studio for a couple of months and write and record your album, and you were so focused on that that by the time you were done your brain was fried,” he says. “Then you would go on tour for a few months and once again your brain would be fried, and then you would go on to another part, so it was constantly changing. It kept you on your toes and it was never boring – that’s what I’ve experienced in my career thus far.” 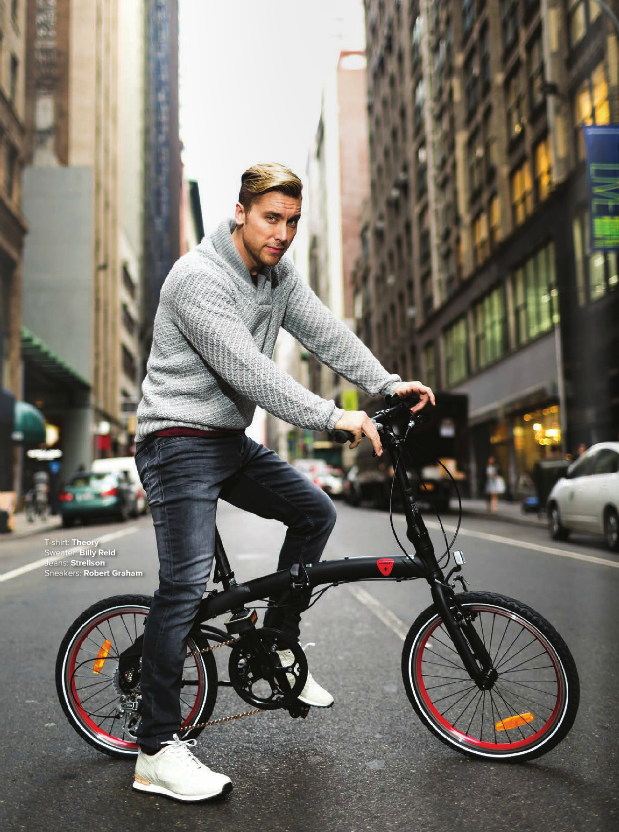 Channeling the need to express his creativity in many different ways, Bass also penned “Out of Sync: A Memoir” in 2007, which debuted on The New York Times bestseller list.

“The reason I wrote the book is because I came out of the closet and it was something I hid for so long.” He had only told his story to People Magazine but didn’t want to do any more interviews afterward; emotionally he needed time to step back. “I wanted to disappear for a little bit and let that digest. It was odd being that vulnerable to the world after being so hidden,” he says.

In writing his book, the walk down memory lane was therapeutic; rehashing the past, trying to recall what happened in his life as a kid, and reflecting on the start of his musical career was a process he describes as fun. “To be able to tell that coming-out story and know that you are hopefully helping some other gay kid out there relate to your story … it’s an honor to do that.”

And while he hasn’t read the book in a long time, Bass thinks it would be interesting to go back and read it now to see how much has changed in his life – and how much of the book he no longer agrees with. When he wrote his memoir, he says, it was a “different time in my life.” Now he is much more confident – even a “different man.”

It’s clear when talking to Bass that he is secure in who he is and where he sees his future. He recently celebrated his first year of marriage, and credits his husband, Michael Turchin, with keeping him grounded.

“He’s very supportive of me and totally understands what I’m going through,” says Bass. “If I didn’t have that partner, I’d probably be going crazy right now. It’s nice to have someone who has your back and wants to see the best for you.” 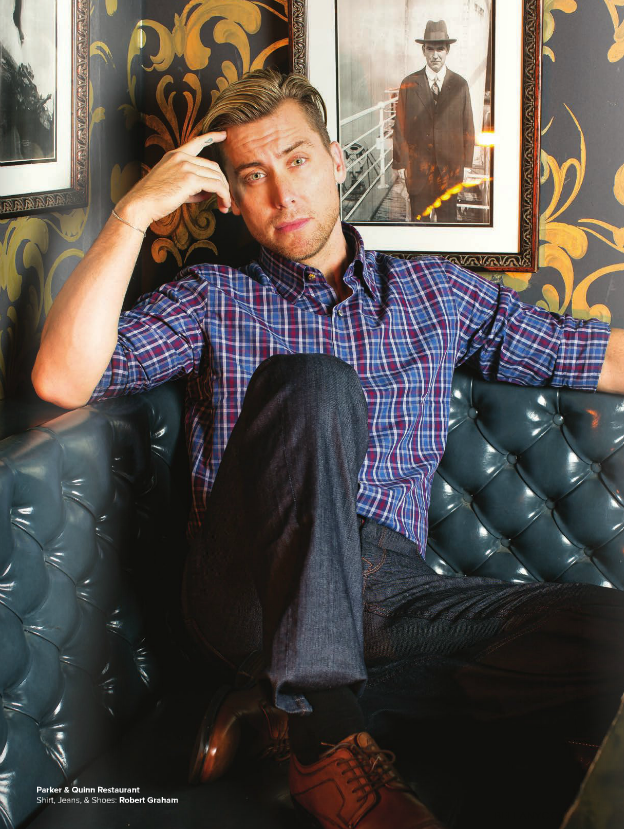 In addition to everything on his plate, Bass is deeply involved with charities and organizations that are close to his heart. “One of the best things about having a voice is being able to give back and hopefully make this world a little better.”

Another cause important to Bass and his husband revolves around their passion for animals. The couple is involved with the ASPCA and also works with “Lucky Puppy,” a not-for-profit retail store in Studio City, CA, from which all of the proceeds from purchases go to the store’s rescue dogs. The couple also fosters dogs in their home until they can find another loving environment for the animals. “Our dream one day is to own a ranch outside of Los Angeles and have puppies running all around,” says Bass. “That way, people can come over anytime they want and adopt right from us.”

Bass has also been assisting his close friend Lisa Vanderpump in protesting the Yulin Dog Meat Festival in China.

A third cause close to the entertainer’s heart is “The Trevor Project,” a national organization providing crisis intervention and suicide prevention services to lesbian, gay, bisexual, transgender, and questioning (LGBTQ) young people. “I love anything about education and children; kids need as much attention and help as they can get,” says Bass. “This suicide hotline prevention saves a lot of kids, and I love supporting them.”

Bass is also in the process of developing a sitcom that he’ll star in, along with another scripted show he’s written for MTV. For the former boy band performer, navigating life after *NSYNC has been a lot of fun. Filled with ideas, Bass says there’s no time like the present to start bringing them to fruition. “I’m enjoying every step of the way.”

Connect with Lance Bass on Social!

Catch “Dirty Pop with Lance Bass” on SiriusXM every day from 4-6 p.m. on Radio Andy (Channel 102)

Bass is also hosting the first ever SiriusXM radio show on “Dirty Pop at Sea” Royal Caribbean cruise from April 10-17. Find out more at DirtyPopAtSea.com.