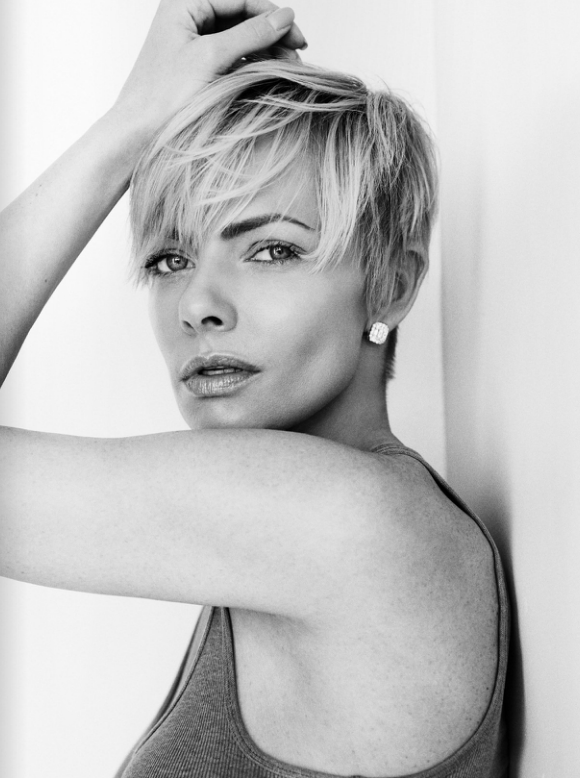 A southern girl at heart, actress Jaime Pressly personifies the charm and graciousness associated with her roots. While she’s been away from the south for more than 20 years, it’s clear when talking to her that the south hasn’t left her.

Growing up in Kinston, North Carolina, the future actress was no stranger to performing. Her mom ran a well-known dance studio, so Pressly took up dancing as well as gymnastics throughout her younger years. “I was around the theater a lot,” she says. “I loved performing and being on stage; it was always in my blood.”

“Getting in front of the camera was the next move for me,” she continues. With a strong determination, she recalls borrowing a $10 bill from her father and exchanging it for singles so she could apply to all the model searches in the back of popular teen magazines. “With my best friend’s help, we sent photos to 10 different model searches,” says Pressly. “I just didn’t tell my parents what I was up to.”

While modeling might have sounded far-fetched to others, for Pressly it was the next step toward her goal. “I’m from this town nobody’s ever heard of and I’ve always dreamed bigger than where I’m from,” she says.

Not long after, a call from the head of the International Cover Model Search would alter the course of Pressly’s life. Despite some initial skepticism on her mother’s part, the pair headed to California for a photo shoot. And in June 1992, not only did Pressly appear on her first cover for Teen magazine, mother and daughter officially left Kinston to start a new life.

She continued modeling in the states until opportunity struck once again – this time taking her overseas to Japan. “To this day I remember getting off the plane, wondering what I was supposed to do,” she says. Emancipated at 15 years old, Pressly says she will never forget how she felt the first time she saw the huge city of Minato, Tokyo. “I got inside my apartment and thought to myself, ‘Oh, God, what did I get myself into?’”

Looking back at the experience, amazing as it was, Pressly says she would never allow her son to do the same. “There’s no way I would let my child go at 15, but times were different then. If he needed to do something like that I’d be going with him.”

Pressly enrolled in college after returning home from Japan, but soon after she began acting and hasn’t looked back since. A few scenes in her first film, “Mercenary,” with the late John Ritter, were enough to get her hooked.

Since then the blonde beauty has appeared in countless films, including “Poison Ivy: The New Seduction,” “Can’t Hardly Wait,” “Not Another Teen Movie,” and “Joe Dirt,” along with TV shows like “Jack and Jill,” “Jennifer Falls,” “My Name Is Earl,” and “Mom.”

For Pressly, her accomplishments have come as a result of hard work and determination. Being told by a Warner Brothers casting director to “stick with film,” because she’d never work in TV, only fueled her desire to succeed. A year later, she booked her first prime-time role on “Jack and Jill” – which, coincidentally, was a Warner Brothers production.

Two years later, Pressly landed the role of Joy on “My Name Is Earl,” a job she says was her “saving grace.”

“It came at a time when I was questioning whether this was the path I wanted to continue following,” she says. “I was tired of living out of my suitcase, coming and going all the time. I wanted a little normalcy in my life.”

But once she got on set that first day, she knew she was home. “I was around really good people who became family,” says Pressly. “[Creator and executive producer] Greg Garcia restored my faith in the business.”

To this day, Joy is still the actress’ favorite character. For Pressly, portraying a woman who was able to say everything women want to say but can’t was fulfilling. “She was my greatest release,” she says.

The show aired for four seasons, and Pressly took home the Emmy for Outstanding Supporting Actress in a Comedy Series in 2007, the same year she gave birth to her son Dezi, now 9 years old.

These days, the hardworking actress is spending her days with a team of incredible women on the multi-camera CBS comedy “Mom.” The show portrays the struggles of a single mother played by Anna Faris, who, after dealing with alcoholism and drug addiction, decides to restart her life.

Playing a role written for her by legendary TV producer Chuck Lorre, Pressly says she was “honored and excited” when she received his call. Plus, she was thrilled to portray someone as multifaceted as Jill, a recovering alcoholic. “When I heard the description, I thought, ‘This is comedy? Sign me up!’”

The show tackles real-life issues, and what Pressly loves most is that the writers aren’t afraid to end a week on a down note. Earlier this season, viewers saw the tragic death of a young woman due to overdose. The following week brought the characters together to find a way to heal, and for Pressly, those two shows were her favorites by far.

“There have been episodes where our characters both laugh and cry, and it’s an incredible opportunity to be able to do that,” she says. “Great comedy comes from real-life drama, and that’s why our show is as good as it is.”

When it comes to finding a balance between her career and motherhood, Pressly isn’t sure that’s 100 percent possible. “You try, but there’s always going to be something that pops up,” she says. “The best thing you can do is understand that it’s never going to be perfect, and go with the flow.”

In 2009, Pressly published “It’s Not Necessarily the Truth,” a book that journaled her life and experiences thus far. It’s not a memoir; rather, she says it’s more of a love letter to her son. “A lot of things happened in a short period of time, and I had done a lot of living before he arrived,” she says. “I want Dezi to understand how important he is to me and how every little thing led up to me being his mom.”

And while Pressly has accomplished quite a bit in her career, there’s still a lot more left to do. She hopes to conquer the Broadway stage, and eventually get behind the scenes to direct and produce. She recently optioned her first book, “Dear Carolina,” for a movie in which she will not only star, but also executive produce.

Outside of work, Pressly is a strong advocate for the AIDS community, with involvement in events like “A Time for Heroes” for the Elizabeth Glaser Pediatric AIDS Foundation. And, as an ambassador for the Elizabeth Taylor AIDS Foundation, she’s a spokesperson for the expansion of the “Sex Squad,” an arts-based sexual health education program. The program originated in Los Angeles and is now expanding to the south – including her home state of North Carolina – where the majority of new infections are diagnosed.

Having lost her uncle to the disease when she was younger, Pressly is helping continue the conversation about HIV/AIDS on a national scale. She’s also participating in the CDC’s Act Against AIDS “Doing It” campaign to help normalize HIV testing in the United States. The hope is to make testing part of every American’s health routine.

For a girl who grew up on the real Dawson’s Creek, it’s no surprise she finds happiness by the water with family and friends. With the majority of her life spent in a business that emphasizes beauty, Pressly says her views are much different now that she is older and has become a mother.

“For me, beauty is the ability to listen to others, not be judgmental, and have the confidence to be comfortable in your own skin,” she says. “And, of course, a great sense of humor is most important.”

Celebrities Come Out for the Golden Heart Awards in NYC

Why Dog Owners are the Sexiest Type of People