Cancer – a small word, just six letters, yet so powerful. A disease that strikes millions of people every day. Yet until it touches a loved one, our minds cannot fully comprehend the power it carries and the devastation it leaves behind.

In 2012, John and Sarah Bartosz lost their son Jack, just a few months shy of his 10th birthday, to cancer. Diagnosed at the age of four with neuroblastoma, an aggressive childhood cancer, Jack endured countless surgeries, treatments, and clinical trials, all with the hopes of beating the disease.

Despite everything they did, it was a battle they couldn’t surpass. Upon learning they were out of options, the Bartosz’ were faced with the difficult task of breaking the news to their daughter Annie, Jack’s twin sister.

The loss left Annie with questions. How was this possible when Jack was considered a survivor, since his cancer had been in remission for longer than five years? “After six years and 11 months of battling the disease, he was still considered a success story even though the disease was always present,” says Sarah Bartosz.

Armed with the belief that something had to be done – not only to create new treatments, but also to elevate awareness of the need for support for families affected by childhood cancer – Annie suggested that she and her parents create a foundation. The couple spent months talking to their daughter about what it was she hoped to achieve.

“Having just lost our son, we didn’t feel we were in a position to dictate to her what we should do,” says Bartosz. “She was quite insistent and we wanted her to feel a sense of ownership. We hoped it would help with her grief and healing.”

After seeing the world turn pink in October for breast cancer, Annie was determined to do the same for pediatric cancer. With gold serving as the national color for childhood cancer and September (the 9th month) being National Childhood Cancer Awareness Month, G9 was born.

Accompanying her twin brother around the country for various treatments put Annie in the unique position of meeting other children battling cancer. It also gave her a firsthand view of the impact the disease has on patients and families, and the pressing need for advancement in the field.

Watching their young daughter take action left the couple feeling bittersweet. “As parents, we were in a position to grieve one child, but also allow our other child to flourish and blossom,” says Bartosz. “How do you juxtapose this overwhelming grief with overwhelming pride?”

Six and a half months pregnant at the time with their son Tommy, Sarah also wanted to do something to make the world a better place, not only for her own kids, but all children. 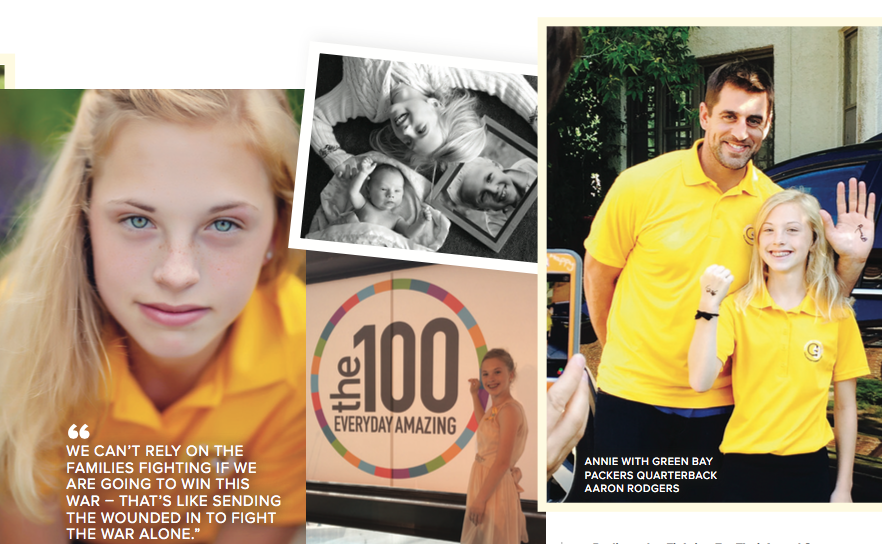 G9 became a registered charitable trust in 2013. The foundation’s mission is focused on taking action and moving the needle further for pediatric cancer. Statistics indicate 80 percent of children will survive childhood cancer, but that number is based only on that five-year benchmark. “There are 69 on average life years lost when a child dies from childhood cancer,” says Bartosz. “It’s completely unacceptable.”

While at Memorial Sloane Kettering Cancer Center, the family worked with others to collectively help fund the development of a new treatment and were successful in doing so. “It gave us the momentum to know that change can happen on a grassroots level, but we shouldn’t have to rely on the families fighting cancer to find and fund new treatments,” she says.

“My daughter Annie summed it up best to a room full of people when she said, ‘We can’t rely on the families fighting if we are going to win this war – that’s like sending the wounded in to fight the war alone,’” says Bartosz.

As a fundraising organization, G9 has put their stake in the ground to raise funds to support early phase clinical trials and assist in the development of new, less toxic treatments. Currently, there are only 27 hospitals in North America that offer early phase trials, and the foundation is providing funding to assist all of them.

They’ve also received support from Green Bay Packers quarterback Aaron Rodgers. In 2011, Jack had the good fortune of meeting the football star and an immediate friendship blossomed, one that lasted throughout Jack’s short life.

In 2014, #itsAaron, a web-series created by Rodgers to highlight local organizations doing good work in the Milwaukee area, featured G9. “Aaron really helped to put us on the map and generate the kind of awareness we needed, which was wonderful,” says Bartosz.

Dedicated to Fighting For Their Loved Ones

As the family continues in their efforts to raise awareness about childhood cancers and change the conversation, Bartosz is adamant when she says a cure, along with safer treatments, must be discovered for both pediatric and adult cancers. Statistics show that 95 percent of childhood survivors will have a life-threatening side effect by the age of 45 years old.

That statistic became a reality for the family when they suffered another devastating loss this past March. John, at the age of 47 years old, passed away from the after effects of the treatments he received in his early 20s when he, too, had been diagnosed with a rare form of cancer. “My husband quite literally disintegrated from the vast amount of radiation he was given that was supposedly his cure,” she says.

It’s difficult to fathom that the treatments available are the very same ones that ultimately could do harm. “As parents we are put in a no-win situation, knowing the only option we have to help save our children is this horrible, toxic therapy that they might later pass away from,” says Bartosz.

With the help of everyone involved in, the goal is to give people a sense of hope, not just to survive, but also to thrive. This month they will be using the hashtag #growgold in their efforts to increase awareness.

“Every generation hopes they can leave the world a little bit of a better place; this is the way in which we can do that.”