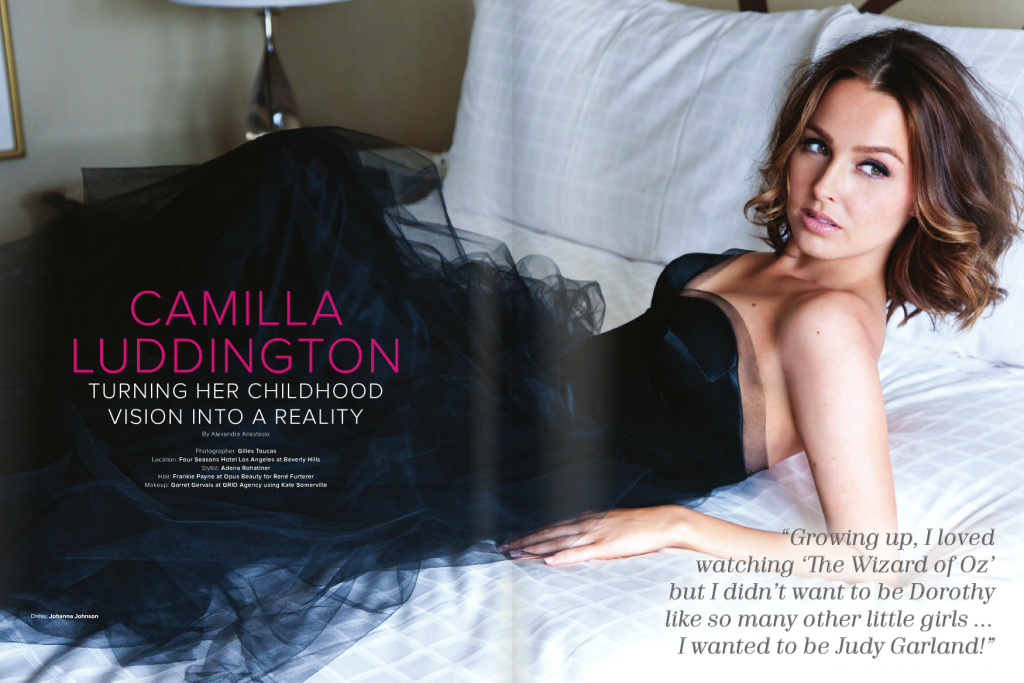 “Growing up, I loved watching ‘The Wizard of Oz’ but I didn’t want be Dorothy like so many other little girls … I wanted to be Judy Garland!”

As a young girl in England, actress Camilla Luddington was determined and focused to make a career out of doing what she loved and following in the footsteps of her childhood hero. As a result, she won her first talent show at the age of 4 and landed a talent agent at 11. Luddington’s dreams of stage and screen were slowly beginning to take shape. While it wouldn’t be until her late teens that the “Grey’s Anatomy” star’s time to shine on screen would arrive, she says the struggles that have come with such a career haven’t bothered her. “I couldn’t imagine doing anything else; it’s been tough, but worth it.”

When she was 14, Luddington and her family moved to Texas for a year for her father’s job. While most girls that age might be upset over such a life-changing event, the future star embraced the change without hesitation. “I always loved America,” she says. In fact, she credits the popularity of the English pop band, The Spice Girls, with helping her fit in. The group was at the height of their success at the time, which made it easier to acclimate to a new environment. “Kids were fascinated with me since I was the only British girl they knew.”

The family returned to England while Luddington was in high school, but it wasn’t long before the actress made her return across the pond to continue her education. After a brief stint at a university in Pennsylvania, which proved to not be the right fit, Luddington chose to attend New York Film Academy. She didn’t feel as comfortable in front of the camera as she did on stage, so she knew it was important to shake things up. 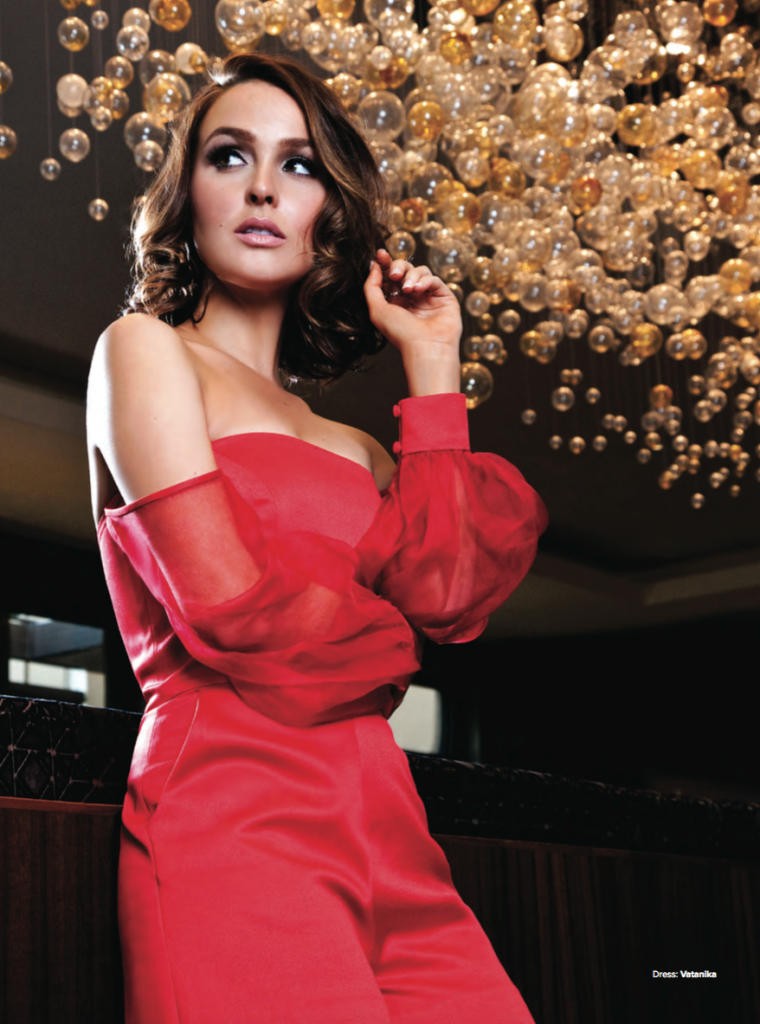 After graduation, when most new actors are pounding the pavement, Luddington returned back home again to England. “I wanted to save some money so I could get a place in LA,” she says. But after waitressing for a year (something she says she was “no good at”), it was time to start pursuing the dream. She found a roommate through Craigslist, something the actress says she’d never do today.  “We would never search for roommates online now, but we’re glad we did because now we’re like family.”

With a few minor projects under her belt, Luddington’s breakout role came in 2011 when she was cast as Catherine Middleton in “William and Kate: The Movie.” The Lifetime Original movie chronicled the relationship between William and Kate from their courtship in college through their engagement. The film was released just two weeks before the royal wedding. “There was a lot of frenzy surrounding the royals, and it felt like we were a part of it,” says the British beauty.

At the time of filming, the Duchess of Cambridge had only done a few interviews about her engagement, so the opportunity to portray someone who was relatively a mystery to the public was “super intriguing” for the actress. With a total of 72 costume changes (all replicas of the outfits Kate wore), Luddington says she enjoyed portraying the future Duchess’ transition from her college years through her more glamorous looks.

When filming wrapped, Luddington’s star continued to grow; she booked recurring roles on shows like HBO’s “True Blood” and Showtime’s “Californication.” The characters she portrayed were far cries from the role she had just wrapped up, but for the talented actress that’s one of the things she loves about acting – the opportunity to transform into someone else. “It’s always fun to play something different.” 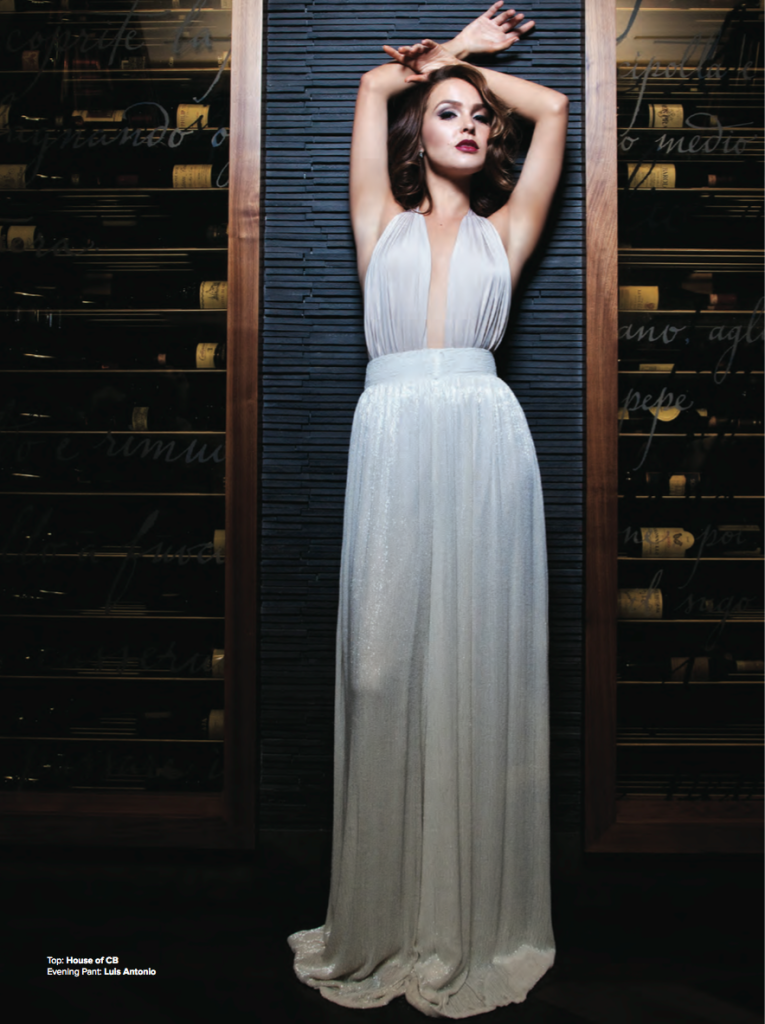 Shortly thereafter, Luddington auditioned for a role in a new TV show being created by the Shonda Rhimes; while she didn’t get the part (the show never made it to air), the down-to-earth actress got a second chance. “Shonda was looking to add five new interns to ‘Grey’s Anatomy’ and hadn’t found what she was looking for,” says Luddington. This time she landed the part. “It’s amazing working on one of Shonda’s shows. I’m glad she remembered me.”

A super-fan of “Grey’s,” Luddington was not only excited to join the cast in the role of Dr. Jo Wilson but says she was even more elated to learn her character’s love interest was Alex Karev (played by Justin Chambers). She recalls their first meeting a few days before their first scene together. “Justin stopped by my trailer and broke the ice when he said, ‘I hear you’re my new girlfriend.’” With a similar response, Luddington says he was so sweet in the initial meeting and remembers thinking “thank God he is so nice!”

While her character has been saving lives since season 9 (the show is going into its 12th season this fall), Luddington loves the strength her character embodies. She’s battled inner demons her entire life yet continues to break through and put herself out there. “Jo has huge trust issues, and in season 12 not everything comes easy for her; I like playing that.”

Welcoming the challenges her character must face, she’s invested in Jo and fiercely protective of her. Luddington lost her mom when she was 19 years old and knows the feeling of having your world turned upside down. She hopes those watching feel inspired that they too can overcome whatever adversity they’re going through.

For Luddington, she can relate to the ambition, struggle, and feeling of loss her character has experienced, but that’s as far as the similarities reach, she says. And while she has thankfully never experienced the abuse and the aggression that Jo has, she says it’s an interesting story to explore and share with the audience.

In addition to her work on the hit ABC medical drama, Luddington has been hard at work on a myriad of projects. This past summer she wrapped up filming the movie, “The Healer,” starring Jonathan Pryce, Oliver Jackson-Cohen, Kaitlyn Bernard, and Jorge Garcia (find out more at Instagram.com/HealerMovie). While the actress describes the project as “funny and charming,” there are some heavier issues in the story that deal with childhood cancer, she says. A portion of the proceeds will be donated to Newman’s Own Foundation, the private foundation the late actor Paul Newman established in 2005 to sustain the legacy of his philanthropic work.

Luddington also provides the voice and motion capture of Lara Croft in the 2013 game, “Tomb Raider” and the upcoming sequel, “Rise of the Tomb Raider,” set for release  in November. After watching what goes into making these games and the physicality they require, Luddington says she has a newfound appreciation for them. She even had to change up her workout to include other types of physical activity to train her body to move in different ways.

“Every part of making those games was amazing, and I’m definitely a fan more so than ever.”

Luddington is currently working on a “top-secret project” that’s set for next year, one she says is “really exciting.” She promises fans she’ll Tweet about it once she can officially discuss it. “It’s something different to anything I’ve ever done before.” 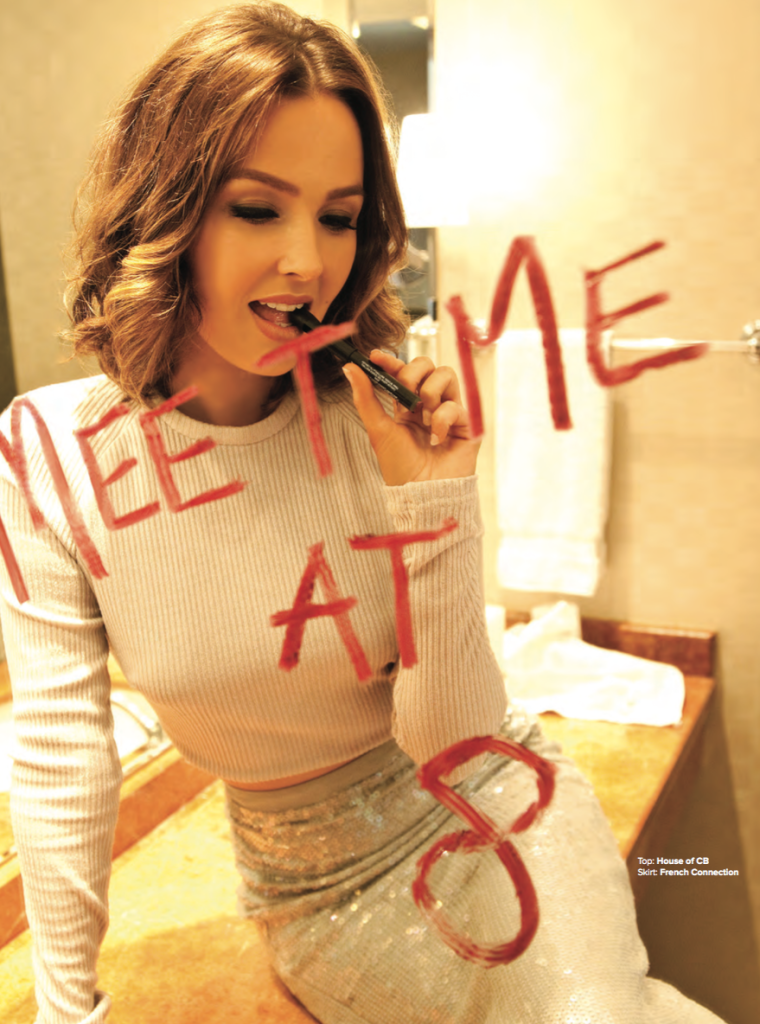 With all this busy actress has going on, she still makes time to lend her support to the things that matter most to her. A lover of dogs, Luddington currently has a terrier mix named Gus and recently adopted another rescue pup, 3-year-old Sully from a shelter in Los Angeles, making her work with charities such as The Best Friends Animal Rescue and LA Animal Rescue an easy fit.

“If I could do anything, I’d love to one day have a [pet] sanctuary,” says the actress who admits she is most happiest when she’s at home with her puppy. “Waking up with him is perfection!”