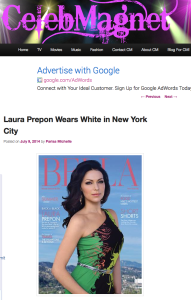 Instead, Prepon was seen wearing white at Bergdorf Goodman’s for a private fitting of her custom-made Isabelle Armstrong Couture evening gown in preparation for an upcoming hosting gig for Bella NYC Magazine’s All-White Party in the Hamptons.

Prepon is currently in New York City filming the 3rd season of Orange is The New Black.