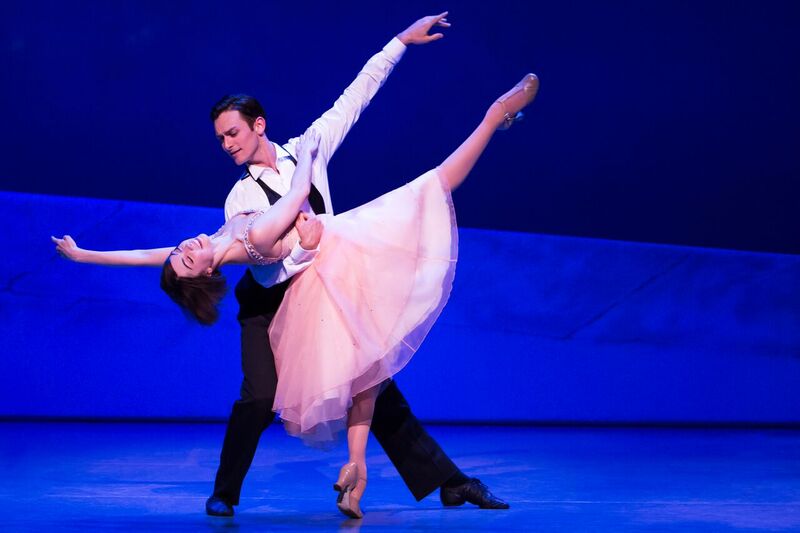 Lavish Broadway musicals are designed to ignite the senses. With a classic score, exquisite choreography and eye-popping scenery, An American in Paris fuels the emotions in ways that few musicals can match.

Playing through the end of the year at the iconic Palace Theater, An American in Paris is the lovelorn story of a young American soldier and a beautiful French girl in war ravished Paris, each yearning for happiness after the devastations of the Second World War.

Garen Scribner and Leanne Cope, along with Dimitri Kleioris and Sara Esty (who play the lead roles on Wednesday and Saturday matinees) brilliantly capture the essence of the story. Both of these on-stage couples present a palpable chemistry that endears the audience from the first moment they appear side by side.

With such timeless songs as “I Got Rhythm” and “I’ll Build a Stairway to Paradise” – whose dance scene brings the house down – this captivating musical resonates with audiences of all ages.

The ballet-laced choreography of Tony Award winner Christopher Wheeldon — one of the most celebrated ballet choreographers today — receives ovations that linger long after the dance numbers subside. This is not ballet conducted solely for the purists, but choreography that touches a chord with just about anyone who appreciates poetry in motion. The highlight of the choreography is a 14-minute ballet that brings the show to a close.

The audience is not only entertained by showgirls in rhinestones and feathers, but by elaborate set designs by Bob Crowley that rival anything on Broadway. It’s no surprise that An American in Paris won four 2015 Tony Awards, four Drama Desk Awards, four Outer Critics Circle Awards including Best Musical, the Drama League Award for Best Musical and two Theatre World Awards.

Perhaps it’s the babyboomers of today’s Broadway audiences that yearn for a romantic respite from some of the off-color and highly suggestive productions that have found a home on Broadway over the past few years. If so, they can look no further than An American in Paris, whose book by Craig Lucas presents a charming combination of love and laughter.

This is Broadway at its very best.

Get The Inside Scoop on Hampton’s Hottest Nightclub, AM Southampton, By The Two Who Know It Best